Automotive marketplace Carro has launched a regional branding campaign and collaborated with budget carrier Jetstar for in-flight advertising. Revolving around the “ease” of selling a car in one day, Carro aims to address various pain points from the customer’s angle on its ads.

In addition, as Carro targets the “affluent and financially-savvy” segment, Seewal said these individuals are well-informed and travel frequently in the region for both business and leisure. The campaign ads will run across Southeast Asian routes taken by Jetstar such as Singapore, Jakarta and Bangkok, where Carro has presence in or is expanding to.

Seewal was also of the view that in-flight advertising gives 100% share of voice and strengthens brand recall, which is critical for the brand which is aggressively expanding in the region. According to Seewal, given how “young” the brand is at this stage, the overall ROI is to reach out to the right customer segment and unify the locally-run digital campaigns in Indonesia and Thailand.

“We feel that word of mouth is very powerful in this business and in-flight advertising is a good way of engaging with this audience in a captive environment,” she said. 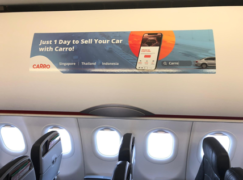 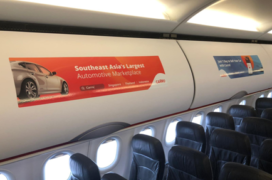 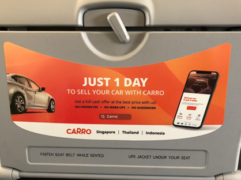 In Indonesia and Thailand specifically, Carro implemented hyper-localised content to better resonate with the locals whose native languages are Bahasa Indonesia and Thai respectively. The ads in Thailand also feature a mascot bunny called “Cruize” to convey the speed of service by Carro. The campaign will run for three months on digital platforms with new creatives pushed out regularly on social, while the ads will remain on Jetstar flights for five months. Here are some of the digital ads plastered across social media: 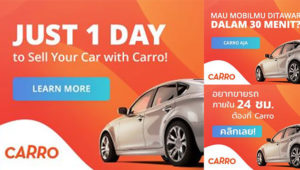 Last month, Carro secured US$30 million to further its expansion across Southeast Asia, starting with its acquisition of Indonesia’s C2C marketplace platform Jualo.com. Founded in 2013, the Jualo.com marketplace helps private and professional sellers trade new and used goods in over 300 categories including cars, motorcycles, property, fashion, electronics; as well as post job adverts. With its latest round of funding, Carro’s accumulated total amounts to US$90 million, with over US$60 million raised from its last round by existing investors Insignia Ventures, B Capital Group, Singtel Innov8, Golden Gate Ventures and Alpha JWC.